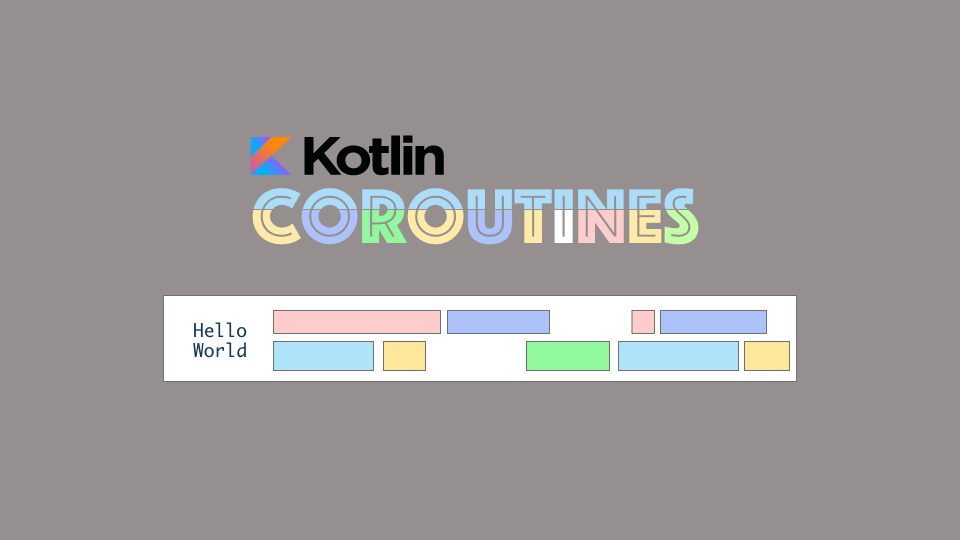 In modern mobile applications, it is common that the application is required to perform network calls. The developer needs to make sure this heavy work is not running in the main thread of the application, as this will block the UI, leading the application to be unresponsive and triggering an Application Not Responsive (ANR) error.

There have been many approaches to preventing apps from blocking, including threading, callbacks, futures, promises, and most importantly, coroutines.

Kotlin handles this issue effectively by delegating most functions to libraries and integrating coroutine support at the language level. A coroutine is a concurrency design concept that may be used on Android to facilitate asynchronous function operation. Based on the existing principles from other languages, coroutines were added to Kotlin in version 1.3.

Coroutines not only enable asynchronous programming—often known as non-blocking programming—but also offer up plenty of additional possibilities, such as concurrency and actors. Coroutines on Android manage lengthy operations that will otherwise render your app unresponsive by blocking the main thread.

This article discusses how to leverage coroutines in Kotlin to solve asynchronous programming challenges, which allows you to create clearer and more efficient code.

Before we get into coroutines, let's have a look at some of the alternative solutions.

Threading, or using a separate thread for long-running functions is the most well-known approach to avoid blocking the UI. However, it has several drawbacks: threading is costly, the number of threads is limited by your operating system, and debugging threads becomes yet another issue in multi-threaded programming.

Callbacks are another popular solution to concurrency problems. A callback is used to provide one function as a parameter to another function, which will then be called after the process is finished. Although it seems like a possible solution, It may cause callback hell which will make it hard to propagate and handle errors.

A future or promise (other languages use other names) entails a promise object that can be operated on after a function call. Using a promise requires us to use a specific design pattern and API to handle chaining calls. We also need to introspect the promise object to be able to get the real value being promised.

Kotlin's approach for working with asynchronous code is to adopt coroutines, instances of suspendable computations, in which a function can postpone its execution and restart it later. Promise and Coroutines differ primarily in that Promise returns an explicit result object, whereas Coroutines yields (which allows other functions to take control of the running thread), enabling us to suspend or resume a Coroutines. Coroutines aren’t really a new idea; in fact, they’ve been around for years and are common in several other programming languages, like Go.

One benefit of using a coroutine is that writing non-blocking code is almost the same as writing blocking code for developers. The programming paradigm itself does not change. Most of the functionality is delegated to libraries, and you won’t have to learn an entirely new set of APIs.

There are several benefits to using coroutines:

There are four main elements of a coroutine: dispatchers, CoroutineScope, jobs, and CoroutineContext.

There are two ways to start a coroutine:

Because a normal function cannot call await, you should use the launch function to create a new coroutine from it. Only use async within another coroutine or within a suspend function.

Coroutines in Kotlin require dispatchers to specify which threads will be used to execute a coroutine. You need to set Kotlin coroutines to the default or IO Dispatchers to run code outside of the main thread.

Kotlin offers three dispatchers that you can use to designate where the coroutine should run:

CoroutineScope keeps track of each coroutine it generates using launch or async. In Android, several KTX libraries provide their CoroutineScope for specific lifecycle types. ViewModel, for example, has a viewModelScope, whereas Lifecycle has a lifecycleScope. However, unlike a Dispatcher, a CoroutineScope does not run the coroutine.

The following code will demonstrate how to create your CoroutineScope:

A scope that has been canceled cannot launch any new coroutine. As a result, you should always use scope.cancel() when the class that controls its lifecycle is about to be destroyed. When you use viewModelScope, the ViewModel class automatically cancels the scope in the ViewModel's onCleared() function.

A Job is the coroutine's handler. Each coroutine you create using launch or async produces a Job instance that has a unique identifier and maintains the coroutine's lifecycle. You also could provide a Job to a CoroutineScope to control its lifecycle, as illustrated in the example below:

Now, let's discuss how to use coroutines with a real example.

A network request is a common use case for all applications. We cannot call a network request on the main thread because it will block it and cause an Application Not Responding (ARN) error. That's why we need to call network requests in the background thread, and to do that, we can use a coroutine.

Take a look at the following example of repository code:

The makeDownloadRequest(url:) is a synchronous function that blocks the calling of the main thread. If you are not familiar with Result, it is basically just an encapsulation of the success value of generic type T or failure with a throwable exception.

Kotlin already provides the Result class, as defined in its documentation:

A ViewModel will have a function that calls the network request when the user performs an action, like that below:

Calling DownloadViewModel.download(url:) will block the UI thread from which you’re making the request. We must avoid doing this since it will freeze the application UI so that the user cannot interact.

To make the download(url:) function run outside the main thread, create a new coroutine and run the function on an IO dispatcher as follows:

To make this function main-safe, use the withContext(Dispatchers.IO) function provided by the coroutine to change the resolver thread to an IO Thread. Adding withContext will also make the makeDownloadRequest(url:) function become a suspend function. The keyword “suspend” is the way Kotlin forces us to call the function marked within a coroutine call.

Now we do not need to specifically define the dispatcher in ViewModel layer, since we already moved the execution to a repository layer. Take a look at the refactored code:

With the refactored code, we do not specify the dispatchers on the download(url:) function anymore. The coroutine called from viewModelScope is now running in the main thread but it is not blocking the UI update because makeDownloadRequest(url:) is running in the IO Dispatchers.

We also add some response handlers to the network request function, but is it safe from exception?

Our repository layer can still throw an exception because it has a function to write network responses to a file. We can add try-catch function to handle this kind of exception as follows:

Now, any unexpected error thrown from the repository layer will be treated as "Network request failed" and can be handled by the UI layer safely.

In this section, we’ll discuss the best practices for using coroutines to make your applications scalable and testable.

Suspend Function Must Be Main-Safe​

The Dispatcher Should Be Injected​

When creating a new coroutine or calling it inside withContext, it is recommended to inject the dispatchers instead of hardcoding it. This will make your code testable when you want to test the coroutine by changing it to TestDispatchers, which we will discuss in a later section.

Your repository layer code will be refactored as follows:

When creating a test class, make sure to share TestDispatcher with the same scheduler. Doing this will allow your coroutine to run on a single thread to make your test deterministic.

Coroutines offer a lightweight and easy-to-use way to handle multi-threaded programming in Kotlin, as well as in Android development. Since coroutines are fully supported by Android and Kotlin itself, it is highly recommended that you use coroutines when dealing with asynchronous programming. Remember, although it is convenient to use coroutines, you also need to make sure your application handles the suspend function in the correct way.

Due to the fact that we can't really determine which instructions are being executed at any particular time, asynchronous programming can occasionally produce errors. If we want to debug asynchronous code, we may utilize logs. Shipbook captures your application logs and exceptions, allowing you to remotely gather, monitor, and evaluate your user mobile-app logs and crashes in the cloud on a per-user and session basis. This will help you to quickly examine relevant data and solve errors.