From the scenario above, we can understand that the logic of the code we create (in this case, the launch angle calculation) can change—without our knowledge—when another code is added. This can have a major impact, and can even be fatal. But of course, the rocket crash could have been prevented if you had added tests to the code.

Likewise, in software development, you need to do software testing to avoid programs that do not match your requirements. In this post, we’ll discuss software testing and its benefits, unit testing in iOS development using XCTest, and how to write a UI test. You will also learn how to show code coverage in your XCode project.

Software testing is a way to check whether the software product that you make meets your product’s requirements and is not defective.

Unit testing is a series of software tests carried out on certain units. The unit referred to here is the smallest unit component that can stand alone in your code. Writing unit test code has many advantages, including:

Another type of software testing is test-driven development (TDD), a development approach that combines test-first development and refactoring. In other words, test cases for each component are initially written and tested, and if the test fails, new code is written to pass the test, resulting in clean, bug-free code. Because TDD requires an entirely different approach than most people are familiar with (we usually write unit tests after software development), there is a steep learning curve and it can be hard to implement. Still, it’s possible.

As we understand so far, tests in code will help ensure that business logic is successful and suits your requirements. However, remember that doing a lot of tests doesn’t necessarily ensure good results. Instead, it’s better to increase the code coverage of the tests that you create.

Now that we’ve reviewed what a unit test is, let’s discuss how to write one. To get started, you first need to know what to test. The most crucial thing to test is the part of the code that you plan to change due to the addition of new features.

In general, a test should cover the following topics:

XCTest is a framework for creating and executing unit tests, performance tests, and UI tests. It integrates seamlessly with the XCode testing workflow.

To write a test, you’ll need to define test cases using XCTestCase. A test case is a series of associated test methods, including optional setup and teardown functions, before and after the tests. Setup allows you to define the initial state of a test case before it starts. Teardown allows you to clean up whenever the test case has finished.

A test function is a short, self-contained function for testing a specific section of your code. Tests assert that specific criteria are met during execution. If they aren't, test failures (with optional messages) are recorded.

Tests can also examine performance regressions by analyzing the efficiency of code blocks and can interact with an application's UI to verify user interaction flows. You can use XCUIElementQuery to perform a query to locate UI elements (XCUIElement) on the screen. Gesture actions such as tapping, long pressing, swiping, pinching, and rotating are available in XCUIElement.

In this post, we’ll show you how to write a unit test using this sample project. The project is a simple game, where you have to correctly enter the number that completes the displayed mathematical equation.

To familiarize yourself with the game, run the application and give it a try. As you’ll see, when you press the + button, the number displayed on the screen (your answer) will increase by one. When you press the - button, the number will decrease by one. When the equation is correct, the color on the screen will turn green; otherwise it will be yellow. Press the reset button to generate a new equation. 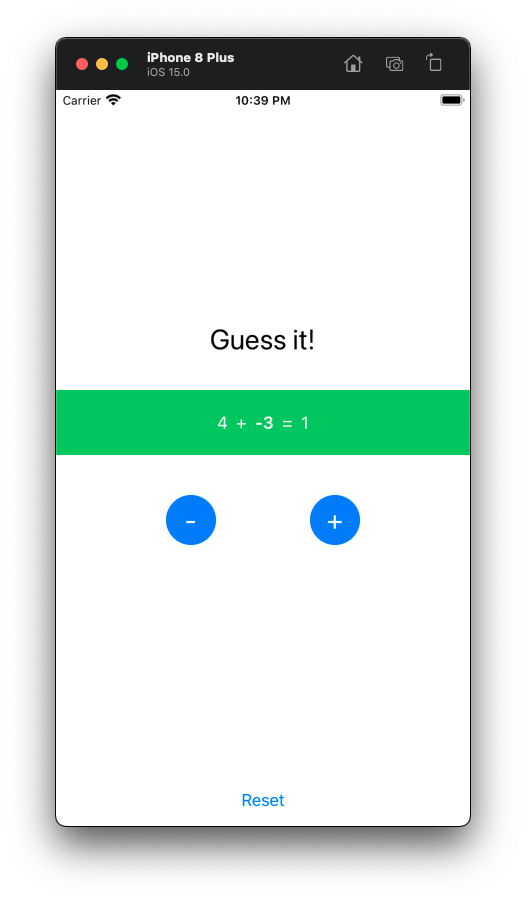 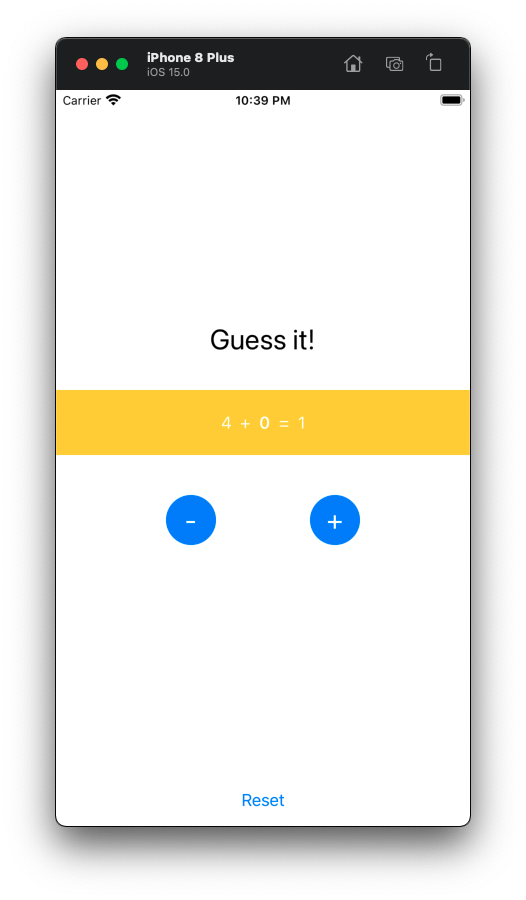 For this game, we will create a unit test for `ContentViewViewModel`. Our view model will have four states that will be consumed by our view. `bgColor` holds the value for the background color of the equation (yellow or green). The first three states are the ones that are needed to hold the equation value.

Here is the formula for the equation:

Now you’re ready to create your unit test. XCode has a test navigator that is very helpful in managing the test code that you create. To access the test navigator, use the Cmd+6 shortcut. After that, click the + sign in the lower left corner to create a new unit test target. Accept the default name and click Next.

Now check that the test bundle shows up in the test navigator once you've added the target. When you open DemoTests, you’ll see an example of the unit test that has been generated. You can see DemoTests as a subclass of XCTestCase. Our DemoTests has the functions setUpWithError() and tearDownWithError().

You can run this unit test in three ways:

The class that we’re going to write the test for is ContentViewViewModel. You’ll need to import SwiftUI because we’ll use it as our UI framework. Also, to gain access to internal types and functions and to add testable annotation when importing Demo projects, add the following code:

Inside the DemoTests body, add your SUT (system under test) object. SUT refers to the object that is currently being tested. You can write your own naming, but we will use the following for consistency:

The contents of setUpWithError() will then be replaced with the SUT object's initialization.

Now let's write a test for the minusButtonLimit function. A test function name is always preceded by the word test and is generally followed by a summary about what it tests. In this case, it’s best to split the test into three segments: given, when, and then:

This is the function that you are going to test:

This is the unit test based on minusButtonLimit function:

Voilà, you just made your first unit test! Now you can try to run it. You should see a temporary pop-up, as follows:

The refactored unit test will become:

Code coverage is a tool that shows you which part of your application code is not tested (at least, not yet). Unit testing is well known for improving the quality and reliability of any software deployment. However, it is impossible to assess how well a unit evaluates your code and how many tests are sufficient. Code coverage measures may help with these issues.

The coverage metric also helps with avoiding test entropy. When code goes through numerous release cycles, there is a risk of unit test atrophy. As new code is introduced, it may fail to fulfill the same testing requirements that you specified when the project was originally delivered. Monitoring code coverage can help you keep your testing up to date.

To enable code coverage in XCode, click on Edit Scheme. Then click on Test action and open the Options tab. Now check the Code Coverage section. After enabling code coverage, re-run the test to see your project’s code coverage.

UI testing allows you to confirm that the user interface of your application is behaving according to your requirements. It works by finding application UI objects, synthesizing events, and sending those events to interact with objects. The process for creating a UI test is the same as for creating a unit test target, but you create a UI test target instead.

To start writing your UI test, open DemoUITests.swift. You are adding an app property at the top of the class body. The app will act as the SUT. The next step is the same as when you created a unit test: Implement a setup and teardown function.

The XCUIApplication object has the XCUIElement property that can be used to access UI elements on the screen. We will use staticTexts to find Text elements and buttons to find Button elements. To find the equation Text label (the displayed text), we will use app.staticTexts.element(boundBy: 1).label.

staticTexts.element(boundBy: 1) will find the second Text element displayed on the screen (because the first element is “Guess It!”). To find the + button, use app.buttons["+"].

Look at the following image to understand the element on the screen: 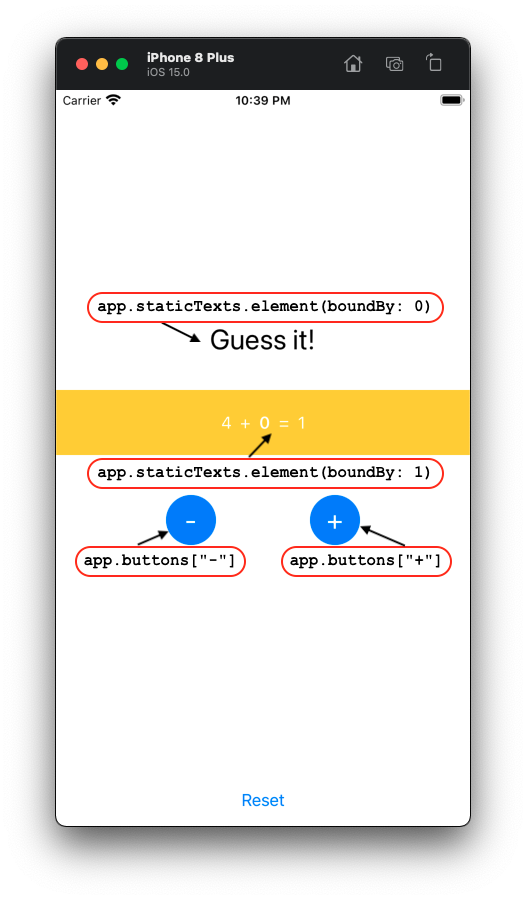 Figure 8: UI element on the application

Your UI test will use the given, when, and then pattern. In the given section, set the equation Text label before you press the button. The action (when) performed is tapping the + or - button, indicated by calling the .tap() function on the button element. Assert that the label displayed before and after the user clicks the button is not equal (by using the XCTAssertNotEqual function). Now try to run the UI test and you’ll see the action performed.

Writing tests for your application is time consuming, but worth it. Of course, we recommend ensuring code quality as early as possible before your application release, as fixing bugs is more costly over time. Still, testing doesn’t always guarantee bug-free software.

That’s where we can help. Shipbook helps you improve the code quality of the software you are developing, giving you the power to remotely gather, search, and analyze your user mobile-app logs and crashes in the cloud, on a per-user and session basis. This will allow you to easily analyze relevant data—and fix bugs faster.