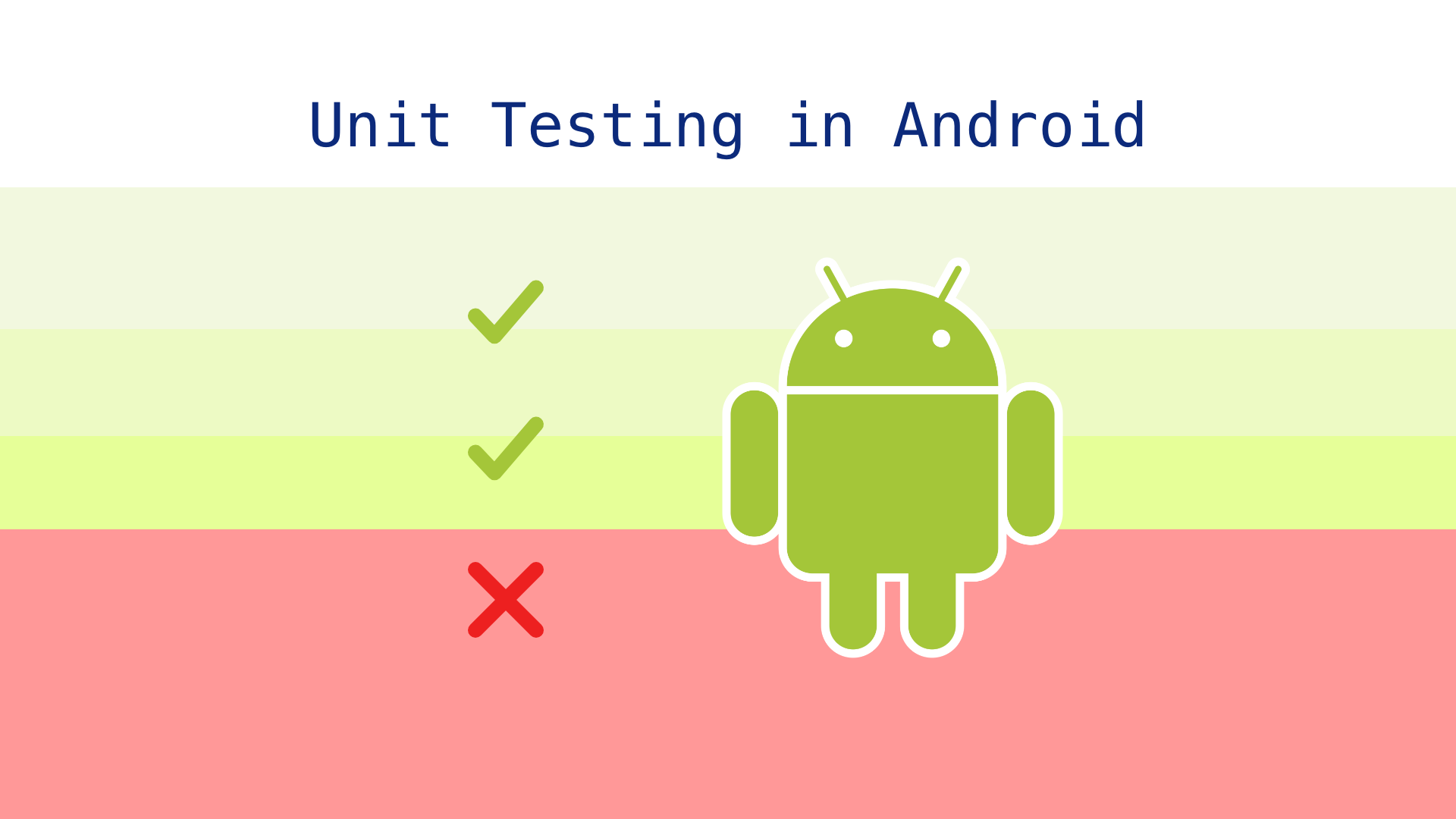 Unit testing entails the testing of the smallest parts of software, such as methods or classes. The main role of unit testing is to make sure the isolated part works as expected without integrating with third-party software, databases, or any dependency. To achieve this, software developers implement multiple testing techniques, like using stubs, mocks, dummies, and spies.

This post will show you why you should perform unit testing and how to implement it in your Android development project.

Unit testing allows you to catch software bugs early in the software development process, instead of QA finding them in the integration phase or end-to-end-testing, or, even worse, in the production environment. Moreover, as you develop your product, more features are added, meaning integration tests and end–to-end tests alone cannot cover all the corner cases. With unit testing, more corner cases are covered, which ensures your product meets the expected quality.

The huge benefit of TDD is that a software team can make sure the product is built and will meet the expected requirements, as demonstrated by the tests. Moreover, because developers write the tests first, they need to spend more time thinking about the product and what features the product has to cover; this way, the product being built will tend to have a higher quality.

Also, writing tests before writing product code will prevent developers from needing to refactor the code just to be able to write tests for it. For example, in the Go language, if the developers do not implement code with an interface, it’s very hard to write tests later on.

To better understand how to apply proper testing techniques for Android applications, let’s get your hands dirty by building a real application and then write tests for it. The application will show a list of popular movies for users to choose from as suggestions for their weekly movie night. Check out this GitHub repository for the full application code.

After opening the application, users will see a list of popular movies:

Figure 1: The movie suggestion application shown on a virtual device

You can then tap on a movie for details like its plot summary and cast:

The unit test of our application will be run by a popular test runner called JUnit, a unit-testing framework that uses JVM languages like Java or Kotlin. If you’re not familiar with JUnit, you can learn more about it here. It helps you structure your tests, like what needs to be done first, what will be done last to clean data, and which data should be collected for the test report.

An Example of a Simple Unit Test​

We have the MovieValidator class in the utils package, which has the function isValidMovie:

In the test file above, we implemented one test case to check the validity of the movie name. We also apply Before and After annotations to adding logging information so that we know when the test is about to start and when it is about to finish.

Notes: In order to install the logger library, we need to add the following code into our gradle configuration file.

When we run the test, we will see results as below:

The example unit test we just went over is very simple. But in real-world applications, you’ll need to deal with all kinds of dependencies and third-party APIs. How can we write tests for functions that interact with third-party dependencies?

When implementing unit testing, the best practice is to not deal with the real thing, like the real database, the real response from another API we take as input for the function, or any third-party dependencies. The reason for this is that when it comes to unit testing, we want to isolate the tests so that each test will test each unit. We could test the database or the third-party dependencies, but this will lead to flakiness in the tests. Instead, we’ll use “test doubles,” objects that stand in for the real objects when we implement the test. There are five types of test doubles: fake, dummy, stub, spy, and mock.

In this article, we’ll review the stub and mock types and use them for our example application.

How to Create Stubs and Mocks in a Sample Project​

To better understand how to use a stub and a mock, let’s apply these techniques for writing unit tests in our movie suggestion app using MockK.

MockK is the well-known mock library in Kotlin, which provides native support for the Kotlin language. Users who are fond of the syntactic sugar of Kotlin will still be able to enjoy it with MockK. Moreover, since the default class and properties in Kotlin are final, using Mockito is considerably hard when mocking in Kotlin. But with MockK’s support, users won’t have to deal with that challenge anymore. To learn more about the benefits of using MockK over Mockito, check out this article.

To include the MockK library in your Android project, we need to add this line into the build.gradle.kts file:

So, let’s say we’re trying to test the class GetMovieDetails.

Initially, we usually implement the code without dependency injection like the following:

The MovieRepository class is as defined below:

But writing code like this makes writing unit tests for this class impossible since we cannot mock dependency for the MoviesRepository class. Well, actually, we can write unit tests literally, but we’d need to use the real movie database, and this would lead to slower tests and make your test couple with third-party dependencies. Moreover, the problem with third-party dependencies is that they might not be working for other reasons, not because of our code.

The best practice when it comes to writing code that can be tested is applying dependency injection, which you can learn more about here.

Then, the class GetMovieDetails will be written as below, with the constructor MovieRepository:

In order to test this class without calling the real database, we need to mock the MoviesRepository class using MockK:

The test function for the movieDetails function will be written as below:

In the setUp step, with @Before annotation, we initialize the getMovieDetails variable.

Then in the test function, we call the run function, with the input as GetMovieDetails.Params(MOVIE_ID. After that, we use the verify function, provided by MockK to check whether or not the call was actually made exactly one time.

Now, we will run the test to see whether it works or not. To run the test in Android Studio, click on the green button on the test method:

Advantages and Disadvantages of Unit Testing​

With unit tests in place, we can be confident that our logic is met and we will be notified if any changes are made that break the existing logic. In addition, the unit tests are run blazingly fast. Still, we’re not sure if users can interact with the application as we expect.

Traditionally, automated end-to-end testing is usually done in a blackbox way, meaning we create another project for automated end-to-end testing of the application. We need to find the locator of the elements in our application and find a way to interact with it via a framework such as Appium or UIAutomator. However, this approach is more time-consuming since we have to redefine the locators of the elements in our application; also, Appium is pretty slow when interacting with the real mobile application.

To be able to resolve the drawbacks of Appium, we’ll apply instrumentation tests with the help of the Espresso and AndroidX frameworks.

How to Implement UI in a Project​

Let’s say we want to check whether the movie list button is shown and is clickable.

The MoviesActivity is defined as following:

The actual logic and how the movies page is rendered is defined in the MoviesFragment class:

The test class will be written like the following:

In the test class, we need to specify the activity of the application we want to run, in this case, MovieActivity.

Before the test is run, the activity will be initialized.

Then after the test is done, we will close the activity.

For the test itself, we find the movieList element, and click on it.

After running the test by clicking on the green button, we can see the test has passed: 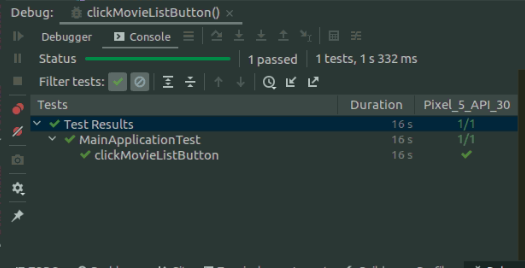 Advantages and Disadvantages of Instrumentation Tests​

So, with instrumentation tests, we can be confident that users can interact with the UI and the functionalities work as expected per our business requirements. And the speed is pretty amazing.

But the drawback of instrumentation tests is that after every change in production code, you will need to change the test code since the test is affected by both the user interface and the business logic.

Creating a working Android application is not a hard task. But to be able to create a high-quality application that’s reliable over time is very difficult. You need to run a lot of tests, from unit tests and integration tests to end-to-end tests. Each test has its own role to play in the success of your product. Creating tests not only ensures high quality, but also gives developers the confidence they need to add new features later on without worrying that new code will break existing functionality. So make sure you implement all of them before releasing your application on the market.

Still, writing tests is a daunting task, so you also need to take your time implementing them. Moreover, debugging tests to know why they failed requires much time and effort too. If you’re having a hard time debugging your tests, or even get stuck in them, check out Shipbook, a logging platform that can help you quickly debug issues in your tests. Shipbook provides numerous resources and documents to help you test your applications, along with logs to easily discover the root cause of that bug you’re struggling with.