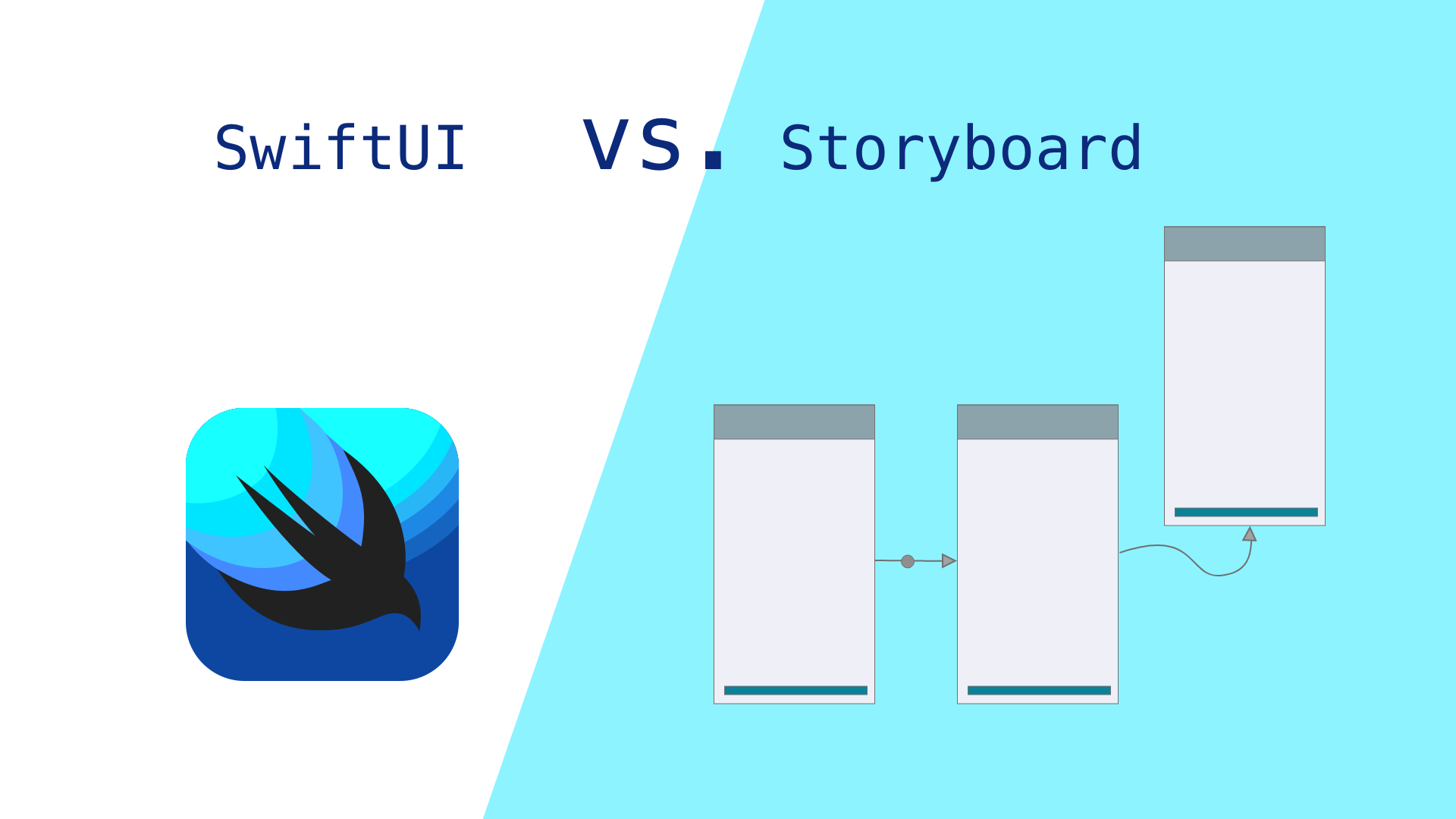 In 2019, Apple introduced SwiftUI as a brand-new user interface foundation for iOS, tvOS, macOS, and watchOS. Since then, it has rapidly evolved into a new paradigm that is altering how developers view UI development for iOS apps. SwiftUI enables iOS developers to create a user interface with a single set of tools and APIs using declarative languages. Say goodbye to cumbersome UIKit code.

In contrast, storyboards, which were introduced w ith iOS 5, save you time when you’re developing iOS applications by allowing you to create and design user interfaces in one Interface Builder, while simultaneously defining business logic. You can use storyboards to prototype and design numerous ViewController views in one file, as well as to create transitions between them.

In this article, we will compare SwiftUI and storyboards. Hint: SwiftUI is more powerful.

To understand the differences between SwiftUI and storyboards, you first need some background on the imperative and declarative programming paradigms.

Prior to SwiftUI, developers had to use different frameworks to create a platform-specific application: UIKit for iOS and tvOS apps, AppKit for macOS apps, and WatchKit for watchOS apps. These three event-driven UI frameworks used the imperative programming paradigm, which involves prototyping or modeling the UI application design. In imperative programming, you define the actions that modify the state of the machine, focusing on the “how,” rather than the “what.”

For example, if you want to create a login form screen using a storyboard, your storyboard source code will look like this: 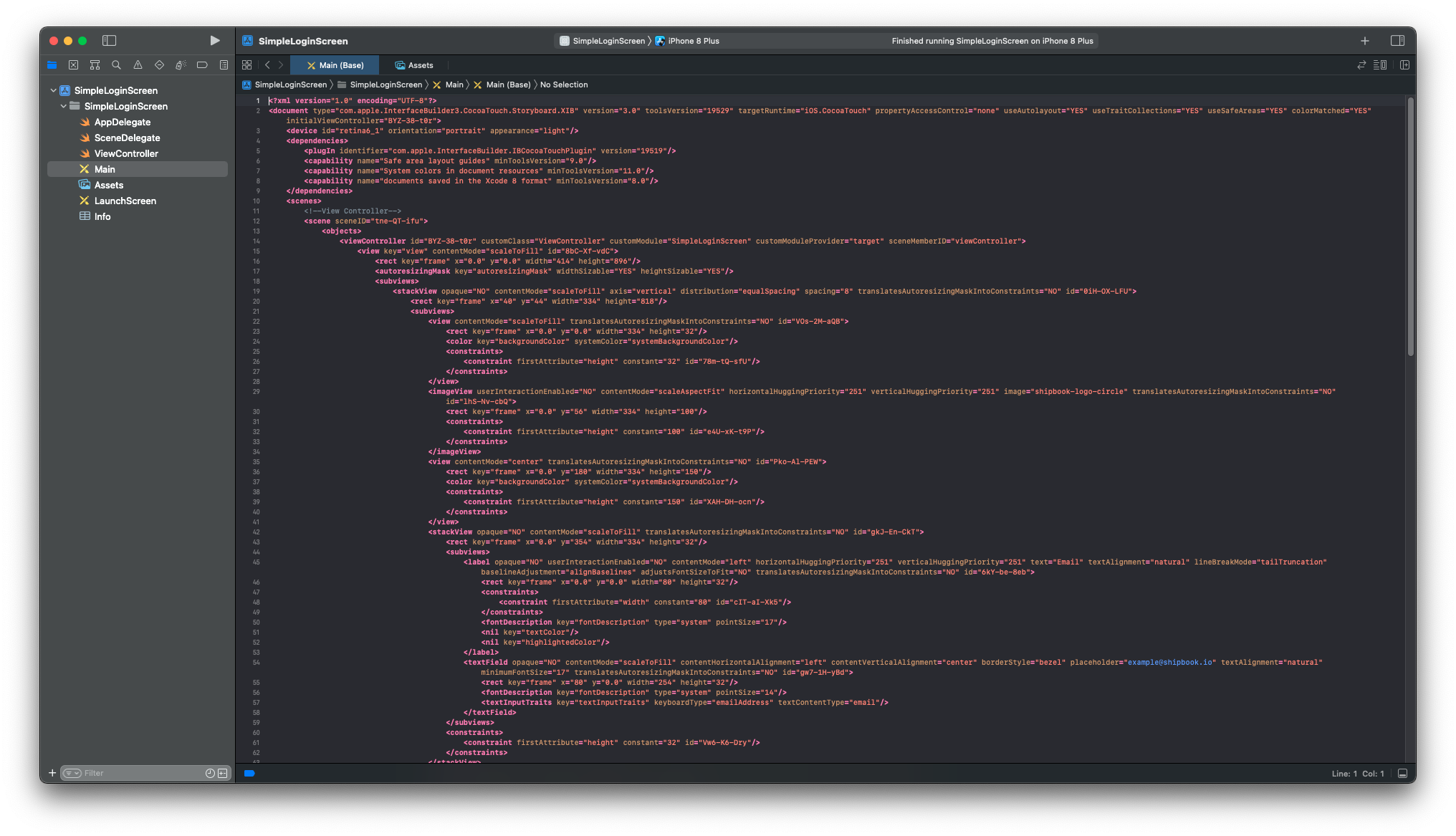 Figure 1: XML file of login form with a storyboard 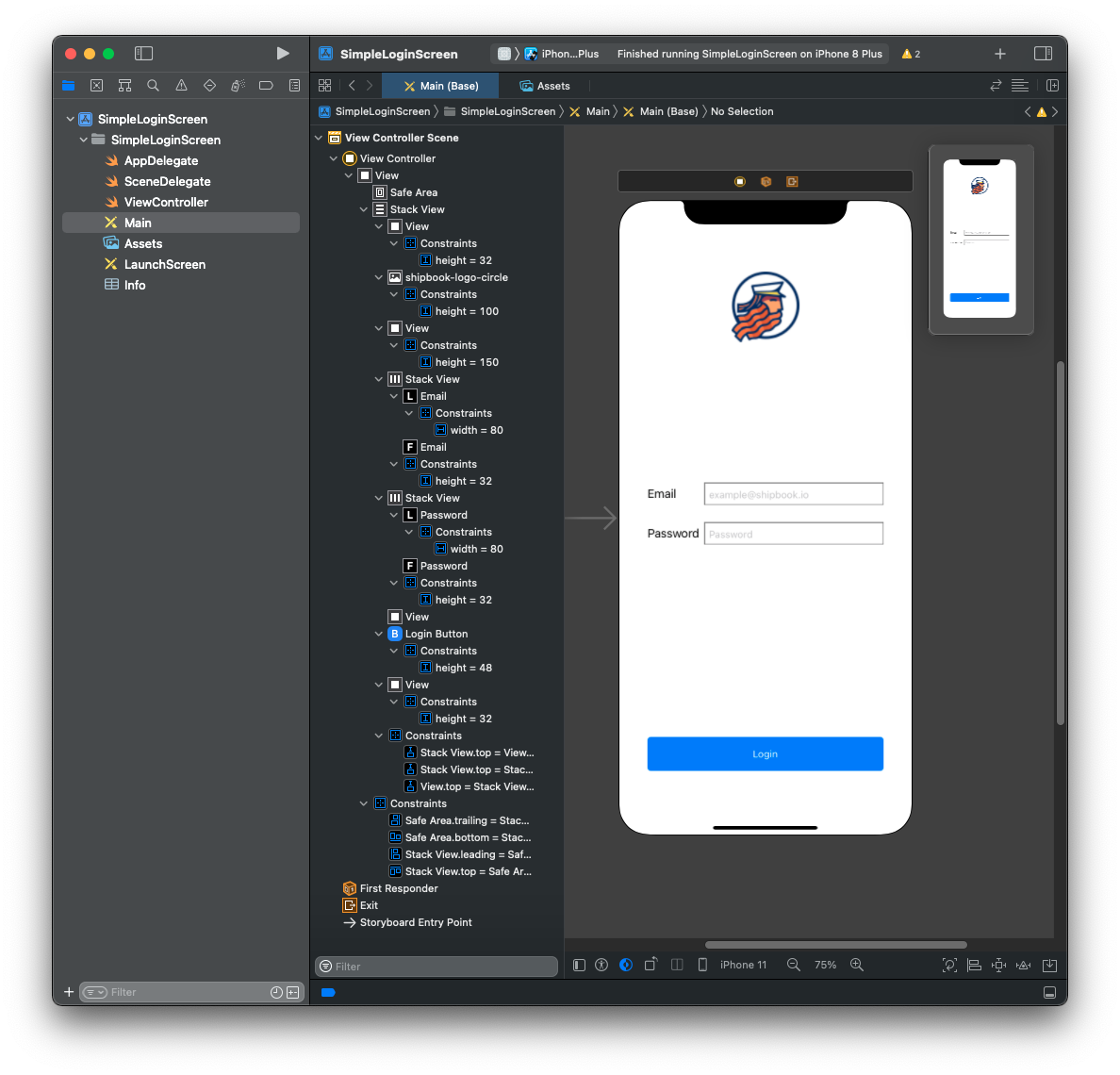 After finishing the UI of the application in the storyboard, you also need to define the business logic in the ViewController file. This is how it looks:

Using SwiftUI, you only need to define what your application looks like inside the ContentView file: 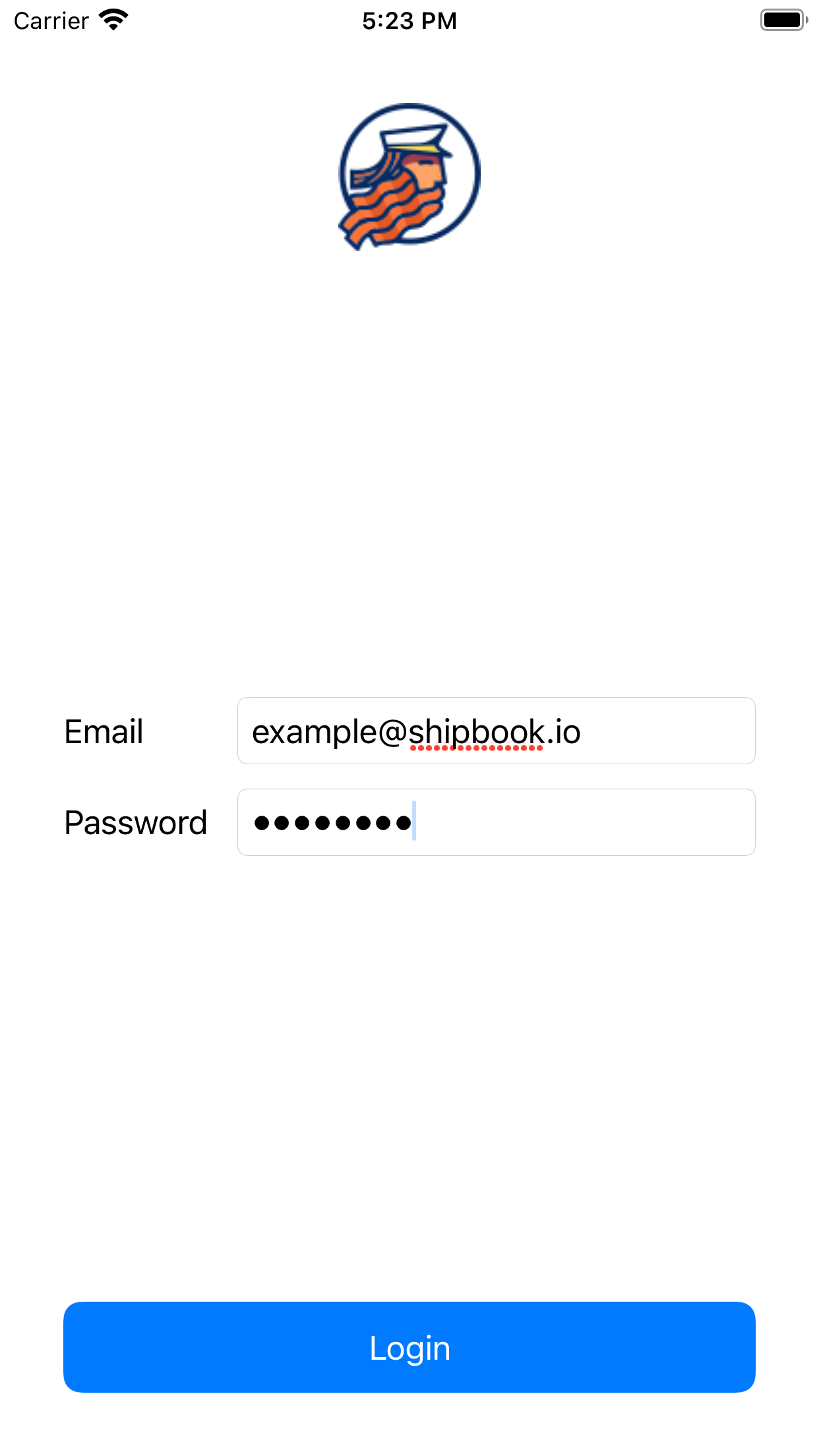 Figure 3: Comparing the UI of a storyboard (left) and SwiftUI (right)

Here is a summary of what each framework supports:

No More Interface Builder in SwiftUI​

Prior to SwiftUI, when developers only used Storyboard, they would create a user interface in Interface Builder and produce .storyboard and .xib files in XML format. Interface Builder uses drag-and-drop gestures to add objects into the canvas. After you move objects and position them in the canvas, you also need to connect it to your code, which is written in another file using @IBOutlet and @IBAction. Finding the correct button to create the interface can be confusing because there are so many options.

One of SwiftUI’s most helpful design tools is Live Preview. This is a progressive method of designing, building, and testing the outcome of the application interface in real time, without even running the app. With the Dynamic Replacement feature, every change made in the code will automatically recompile and update the preview screens. Xcode design tools also provide a drag-and-drop design control to arrange objects in the design canvas. 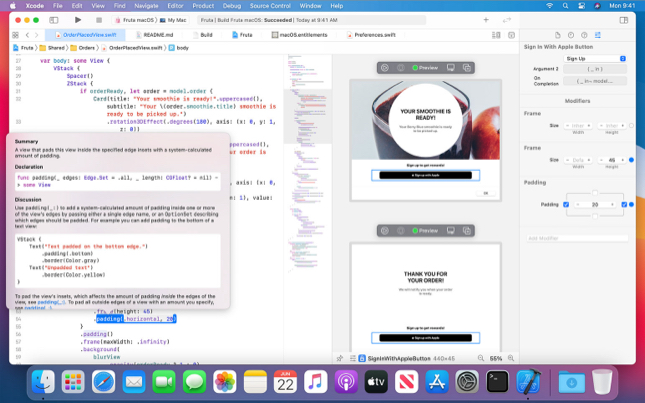 SwiftUI replaces storyboards with code, making it simple to construct reusable views and minimize conflicts caused by the development team's concurrent use of one project.

The Cons of SwiftUI​

Since there aren’t many, let's start with SwiftUI's disadvantages:

The Pros of SwiftUI​

SwiftUI differs from Apple's prior UI frameworks, not just in how views and other UI components are built, but also how view-level state is handled throughout a program that utilizes it. SwiftUI provides a built-in state management function. This means that instead of delegates, data sources, or other state management patterns seen in imperative frameworks like UIKit and AppKit (i.e., a third-party framework such as RxSwift or ReSwift), SwiftUI ships with a number of property wrappers that allow you to describe exactly how your data is observed, rendered, and changed by your views.

Apple added support for backward compatibility so that you can add SwiftUI to existing UIKit projects or vice versa. To be able to import SwiftUI view into UIKit, you can use UIHostingController, which will hold all of the subviews of ViewController in order to become a single SwiftUI view.

It is essential to understand that SwiftUI does not replace UIKit. Instead, SwiftUI is constructed on top of UIKIt, and gives you an extra layer of abstractions. To be able to import UIKit view inside SwiftUI, you can use UIViewRepresentable.

There are three functions you need to override in order to use this protocol:

Creating a user interface will never be easier than when using SwiftUI, since it combines and automatically translates your view into a visual interface element that is suitable for each specific platform (macOS, iOS, watchOS, tvOS, etc.). 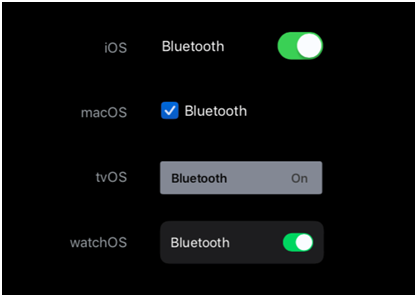 For example, as shown above, the Toggle view will look different on different platforms. SwiftUI may also change the colors, padding, and spacing, depending on the platform, container size, control status, and current screen. This ability to cross-platform build for the many operating systems inside the Apple ecosystem means there’s no need to master three distinct frameworks if you want to create an app that works on Apple Watch, Apple TV, MacBook Pro, and iPhone.

When adopting SwiftUI, you can independently animate changes to views or the state of a view, regardless of where the effects occur. SwiftUI takes care of the complexities of the animation logic (combinations, layers, and interruptible animations). You just need to call a single function, .animation(), to a view that you want to animate, add the animation logic inside of it, and, voilà, the animation is applied.

In the example above, you can add a long-press gesture on the Shipbook image to add scaling animation on it. You can then store the gesture state in isDetectingPress and use it as a value of the scaling effect and animation to be triggered.

When to Use Storyboards—and When Not To​

So, if SwiftUI is the way of the future, why should you still use storyboards? There are a few explanations that come to mind:

Despite these use cases, there are several disadvantages to using storyboards in iOS projects:

It’s important to consider the pros and cons of the UI development framework and features that are suitable for your application. If you are creating a new application and don't care about supporting the old version of iOS, SwiftUI is the obvious choice. It’s also possible to migrate your legacy code to SwiftUI because SwiftUI can be combined with UIKit and storyboards.